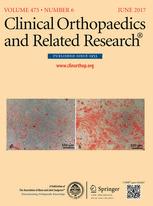 Use of Compressive Osseointegration Endoprostheses for Massive Bone Loss From Tumor and Failed Arthroplasty: A Viable Option in the Upper Extremity

Endoprostheses using principles of compressive osseointegration have shown good survivorship in several studies involving the lower extremity; however, no series to our knowledge have documented the use of this technology in the management of massive bone loss in the upper limb.

(1) What proportion of upper extremity implants using compressive osseointegration fixation principles achieved durable short-term fixation, and what were the modes of failure? (2) What surgical complications resulted from reconstruction using this technique?

A multiinstitutional retrospective review identified nine patients (five women; four men) who underwent 13 endoprosthetic replacements between 2003 and 2014 using compressive osseointegration (CompliantPre-stress Device [CPS]; Biomet Inc, Warsaw, IN, USA) in the upper extremity, including two proximal humeri, two humeral diaphyses, seven distal humeri, and two proximal ulna. During the early part of that period, the indication for use of a compressive prosthesis in our centers was revision of a previous tumor reconstruction (allograft-prosthetic composite or stemmed endoprosthetic reconstruction) (three patients; five implants), or revision arthroplasty with massive bone loss (three patients, four implants); more recently, indications became somewhat more permissive and included posttraumatic bone loss (one patient, one implant), primary bone sarcoma, and resections with very short remaining end segments after diaphyseal resections (two patients, three implants). Minimum followup was 24 months; one patient (one implant) was lost to followup before that time with the implant intact at 14 months and no patients have died. The mean age of the patients was 45 years (range, 21–62 years). Mean followup was 68 months (range, 24–141 months). Implant revision for any cause and for failure of the CPS mechanism was recorded. Modes of failure were categorized as soft tissue, aseptic loosening, structural, infection, and tumor progression; CPS modes of failure were defined as lack of fixation, with or without bone or implant fracture.

Of the 12 implants accounted for beyond 2 years, six had undergone revision of any kind. Only two revisions in two patients were attributable to lack of CPS fixation at the bone-implant interface; one of the patients also had periprosthetic and implant fracture develop through the traction bar. Other modes of failure were aseptic loosening of the standard ulnar component (two patients, two implants), bushing wear (one patient; one implant) and infection resulting in two-stage exchange and free soft tissue transfer with retention of the CPS spindle (one patient, one implant). Complications for all nine patients included one transient radial nerve palsy, one ulnar nerve sensory neurapraxia, one superficial infection, and two glenohumeral subluxations, one underwent revision surgery with implantation of a constrained liner.

A compressive osseointegration endoprosthesis is an option for very difficult revisions or sarcoma resection in the upper extremity in which the remaining segment of host bone is too short for a conventional prosthesis. However, surgeons must inform patients that these are salvage operations, and revision surgery is common. Long-term followup of more patients is necessary to further document the survivorship of these implants in the upper extremity.